And this is the dilemma. Celebration and fun + raising money for Charity – what course of action should Rotarians promote?

And a cracker from Kirsten who discovered that 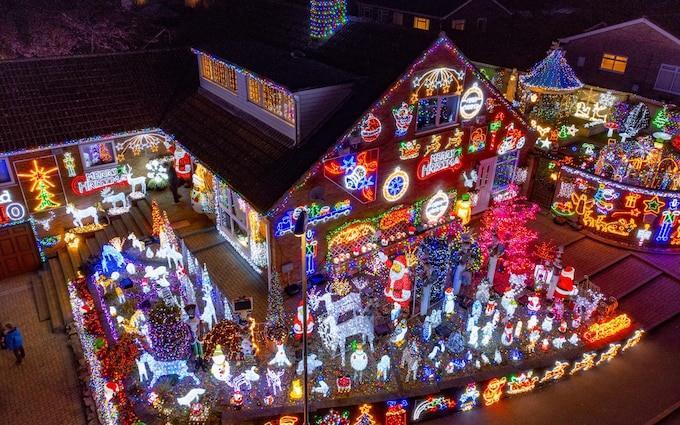 This is from the Telegraph

A couple who adorn their house with thousands of Christmas lights for charity have come under fire for the toll their decorations take on the environment.

Every year Helen and John Attlesey decorate their home in Soham, Cambridgeshire, with a dazzling array of festive lights. The couple have donated the thousands of pounds raised by their display to several charities, particularly Great Ormond Street Children’s Hospital, in gratitude for saving their grandson’s life after he developed epilepsy at the age of six.

But MPs and environmental campaigners have urged people to consider “the effect on our planet against having lots of lights above our doors”. Andrew Griffith MP, Conservative chairman of the Dark Skies All Party
Parliamentary Group, said: “Whilst we all need some festive cheer, much exterior lighting is unnecessarily bright. Had it been in place in Bethlehem, the three wise men would never have seen the stars let alone be guided to the baby Jesus by them.

“A good compromise would be for homeowners to use timers so that they do not stay blazing all night, confusing wildlife and causing glare and distress to neighbours.”

Another member of the group, which was set up to campaign for greater protection of the night sky against light pollution, urged people to show restraint when decorating their homes for the sake of both their neighbours and the planet.

Mr and Mrs Attlesey say they use eco-friendly LED lights for their impressive display.

Philip Dunne, a Conservative MP, said: “I would strongly encourage those people looking to decorate their homes over Christmas to look at using LED lighting where possible to minimise the environmental impact and to ensure their neighbours are not disturbed.”

Barry Gardiner, a Labour MP who sits on Parliament’s environment committee, called on people to “consider our own individual behaviours”. “I hope that when they think about other people, they think about their
contribution to reducing energy consumption.”

Shailesh Vara, the Conservative MP for North West Cambridgeshire and former member of the environmental audit committee, said: “It is time for serious action if we are to ensure a safe and better planet for the generations to follow. That does mean that all of us need to reflect on what changes we can make in the way we live our lives, and then make those changes.”

A Green Party spokesperson said: “We’ve got to weigh up the effect on our planet against having lots of lights above our doors,” while a Conservative former environment committee member added: “Nobody wants to be a
killjoy but we do need to celebrate Christmas in moderation. If that means using fewer lights and less  electricity during celebrations, then that has to be a good way forward.”

LED lights use only 10 per cent of the power of a conventional string of incandescent Christmas lights.

According to the Energy Saving Trust, the UK could fill 15,500 hot air balloons with the carbon dioxide produced by our Christmas lighting each year.

GoCompare has calculated that a display of 100 five-watt bulbs switched on for six hours a day over the festive period will consume, the equivalent of an extra 22.8 days electricity consumption for an average British
household.

Almost a quarter of people will put fewer lights up this year because of the sharp increase in energy costs, with 12 percent saying they won’t put up any for fear of large bills, according to a new poll.

Gareth Kloet, from GoCompare energy, which commissioned the survey, said: “Higher energy costs and also the environmental implications of Christmas lights are causing people to rethink the way they decorate their
homes this December. Cost and climate are clearly having an effect.”

END_OF_DOCUMENT_TOKEN_TO_BE_REPLACED

How Christmas is ruining the planet

Talking Point Maybe some thoughts for next Christmas???  Environmentalists call Christmas the world’s greatest annual environmental disaster. Regardless of how it's celebrated, Christmas is more often than not about consumptionDimitar Dilkoff/AFP via Getty Images...