What is your Rotary inspired “wild idea”? 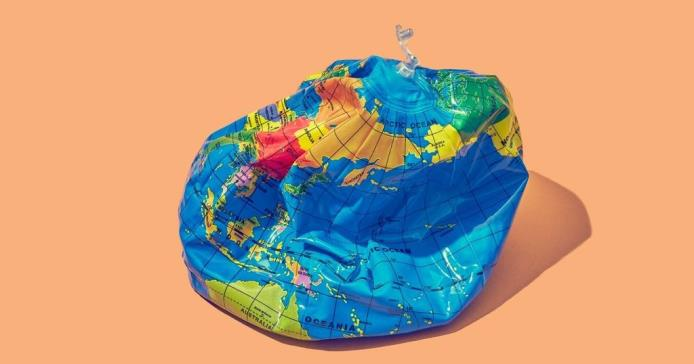 MANY CAME AWAY FROM COP26, the UN climate conference, with a strong sense of
disappointment. Activist Greta Thunberg summed up the proceedings as more
ineffectual “blah, blah, blah.” The final agreement and pledges made at COP26
fall short of curbing global warming to 1.5 degrees Celsius — the metric that
scientists say is necessary to prevent the worst effects of the climate crisis.
Instead, the pledges will only get us to 2.4 degrees Celsius — better than our
current emissions, but still not enough. However, several pledges by individual
countries and joint agreements by dozens of top-polluting nations — along with a
commitment by world leaders to meet again in Egypt in 2022 — suggest reaching
1.5 degrees is possible, even as the window to achieve it narrows. “COP26 is a
step in the right direction,” Ursula von der Leyen, president of the European
Commission, tweeted following the conclusion of the UN conference. Here are
11 new climate crisis commitments — the COP26 silver linings.

World leaders pledged to end deforestation by 2030.Getty/Michael Hall In the
first major pledge of COP26, leaders of more than 100 nations made an agreement
to end deforestation by 2030. Collectively, these leaders represent more than 85
percent of the world’s forests. Included in the pledge are countries like Brazil
and Indonesia, where there is rampant deforestation. Deforestation is a major
cause of climate change. Trees store carbon, which gets released into the
atmosphere when they’re cut down.“These great teeming ecosystems — these
cathedrals of nature — are the lungs of our planet,” Prime Minister Boris
Johnson of Britain said about the new pact. The new initiative seeks to reduce
the financial incentives driving deforestation, including the demand for soy and
palm oil and grazing land for cattle.

During the conference, the government of Ecuador announced measures to expand
protections around the Galápagos Marine Reserve — one of the first and largest
marine reserves in the world. The new measures result in an additional 23,000
square miles of marine reserve, adding to the 50,000 miles already established.
The measure comes at a crucial time: A 2021 study published in
Scientific Reports suggests the Galápagos Islands are especially
vulnerable to climate change, and these threats endanger its extraordinary
biodiversity.

9. A SPACE MISSION TO SAVE EARTH

A European Space Agency mission could help measure solar radiation and get ahead
of global warming.Getty The European Space Agency launched the Traceable
Radiometry Underpinning Terrestrial- and Helio- Studies (TRUTHS) mission at
COP26. The mission aims to measure incoming solar radiation and “radiation
reflected from Earth back out into space” using traceable units. With this more
precise data in hand, scientists can better detect changes to Earth’s climate —
helping us get ahead of global warming.

It was a small moment in a conference filled with big pledges, but on November
11 the Holy See — the government of the Roman Catholic Church — signed the Clean
Energy Transition, which would phase out fossil fuels and transition to
renewable energy sources. Pope Francis has been vocal in calling for “radical”
action ahead of climate talks, even issuing an official papal document on the
subject in 2015 when the landmark Paris Agreement was signed. As the head of the
Roman Catholic Church, Francis wields enormous sway over the 1.3 billion
Catholic individuals worldwide — roughly 17 percent of the world’s population.

7. BRAZIL MAKES SOME BIG PROMISES (BUT DOESN’T LITERALLY SHOW UP)

Brazil has faced staunch criticism for its failure to preserve rainforests in
the Amazon — an essential carbon sink on Earth. Getty / Ignacio Palacios
Brazil’s president, Jair Bolsonaro, has faced an onslaught of criticism and even
accusations of “crimes against humanity” for allowing the widespread
deforestation in the Amazon. The Amazon is a vital carbon sink — a place that
stores significant amounts of carbon dioxide and curbs its release. But recent
research suggests large parts of the Amazon are no longer carbon sinks — and are
turning into sources of carbon emissions. Bolsonaro didn’t help matters
by failing to show up to COP26, which many critics saw as an attempt to avoid
blowback from the burning of the Amazon. But at the beginning of the conference,
Brazil’s government did make three big pledges that watchdog groups will surely
keep an eye on:

India’s prime minister, Narendra Modi, has historically been slow to make
promises on reducing emissions. His environment minister even dismissed the idea
of reducing to net-zero emissions days before the climate conference.

So it came as something of a surprise when Modi pledged to do just that at COP26. He
pledged to get India to net-zero emissions by 2070 — a later deadline than most
countries, but one that could help give the country’s coal-reliant economy time
to decarbonize.

In other significant news, Modi also pledged to reduce the
emissions intensity of all greenhouse gases — not just carbon dioxide — from
India’s economy by 45 percent by 2030.

Other Asian nations joined the net-zero fight at COP26. The leaders of both Vietnam and Thailand pledged to make their
countries net-zero by 2050. Nepal set an even more ambitious goal of a
carbon-neutral economy by 2045.

Over the summer, Costa Rica and
Denmark soft-launched the “Beyond Oil & Gas Alliance,” which they officially
unveiled at the UN climate conference. Research shows the majority of the
world’s fossil fuels must remain in the ground if the world is to halt global
warming to 1.5 degrees Celsius.

The first members of the alliance include Costa
Rica, Denmark, Ireland, France, Sweden, Wales, Greenland, and Québec. California
and Italy are “friends” of the agreement — parties that want to end oil and gas
extraction but have made no pledges yet.

In September, before COP26, President Joe Biden pledged to quadruple funding by
2024 for developing nations to transition to clean energy and deal with global
warming.
Specifically, the US put forth a climate finance pledge of $11.4
billion by 2024. At COP26, the UK published its plan for following through with
its own commitment of $11.6 billion between 2020 and 2025.

However, other world
leaders, like Modi, called on the US and other countries to do more and commit
to $1 trillion in climate finance aid.

More than 100
countries — 70 percent of the global economy — signed the non- binding Global
Methane Pledge, agreeing to reduce methane levels 30 percent by 2030. Measures
to slash methane levels include reducing leaks from oil and gas wells. The
European Union and the US jointly launched the pledge.

According to an EU
statement, “delivering on the Global Methane Pledge would reduce warming by at
least 0.2 degrees Celsius by 2050,” prevent 200,000 premature deaths, and 20
million tons of crop losses annually.

3. CHINA AND THE US JOIN FORCES ON CLIMATE

During COP26, both China and the US agreed to “enhance ambition” on the crisis
and released a joint statement committing both nations to do more to address
greenhouse gas emissions.

In the statement, known as the “Glasgow Declaration,”
China also committed to tackling methane emissions for the first time and to
“phase down” coal consumption in 2026. Meanwhile, the US promised to end
carbon-polluting electricity by 2035.

2. NATIONS PROMISE TO PHASE OUT COAL

Coal
is the most carbon-intensive fossil fuel, and several nations pledged at COP26
to phase it out altogether.Getty / Monty Rakusen

Coal is the world’s most
carbon-intensive fossil fuel and it is responsible for roughly 0.3 of the
1-degree Celsius rise in global temperatures since the Industrial Revolution.
Scientific research suggests we need to leave 90 percent of the world’s coal in
the ground to have a shot at limiting global warming to 1.5 degrees Celsius.

Although the two biggest coal-burning countries — India and China — continue to
burn coal at significant rates, overall, coal extraction rates have been falling
in other countries. On the heels of this decline, 77 nations at COP26 agreed to
a landmark agreement.

1. “FOSSIL FUELS” IS INCLUDED FOR THE
FIRST TIME IN A FINAL UN CLIMATE AGREEMENT

Much of the media coverage on the
COP26’s final agreement, or “Glasgow Climate Pact,” focused on changes made in
its final hours, which activists, scientists, and some world leaders have
heavily criticized.

India and China helped weaken the final agreement at COP26,
changing the language from a “phase out” to a “phase down” of coal.

But what
went overlooked was the agreement’s landmark inclusion of the phrase “fossil
fuels” — the first time in the conference’s history that fossil fuels have been
openly recognized as the leading cause of climate change in the final text.