Once all the three steps above have been explored, options for installing renewable energy should be considered.  Individuals and organisations should not be swayed by the fact that renewable energy such as solar panels is a visible statement whereas more mundane actions such as loft insulation are invisible, and yet the latter can have a more dramatic effect on reducing energy consumption and carbon reduction as indicated in sections 2 and 3 above.

Fig. 8 shows a domestic property in Norwich with a 1.25 kW array of solar photovoltaic cells, and a two panel solar thermal array.   The optimum orientation is not necessarily due south as is commonly assumed.    In East Anglia the optimum is actually 5 -10 degrees west of south.   This is because there is generally less cloud cover in the afternoon than in the morning in East Anglia. 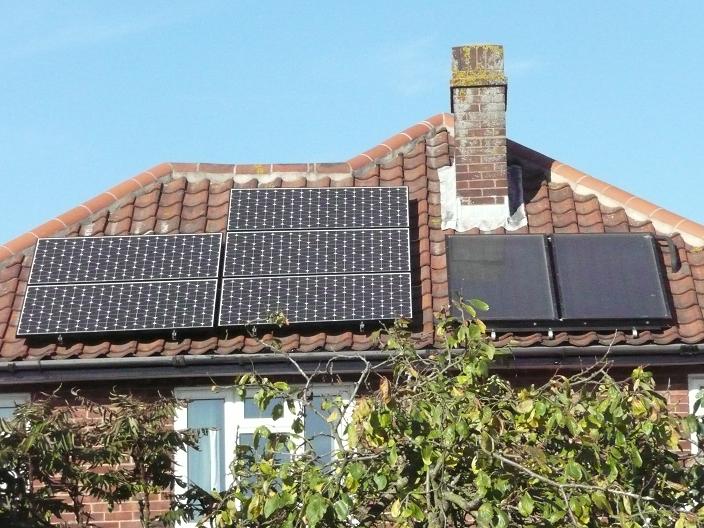 The measured performance of these solar electric cells shows a load factor of 9.5% and a typical annual output is 1150 – 1200 kWh.    For the solar thermal panels, the measured annual output has averaged 850 – 900 kWh per annum.   However, the output from solar thermal panels is influenced significantly from the actual time of day that hot water is used.    Thus if a hot bath or shower is taken late at night or in the early morning, then the water storage tank will have much of its heat drained when the sun starts rising, and thus can collect more energy than if no hot water had been used and the water in the tank was still at a moderate temperature at the start of the day.