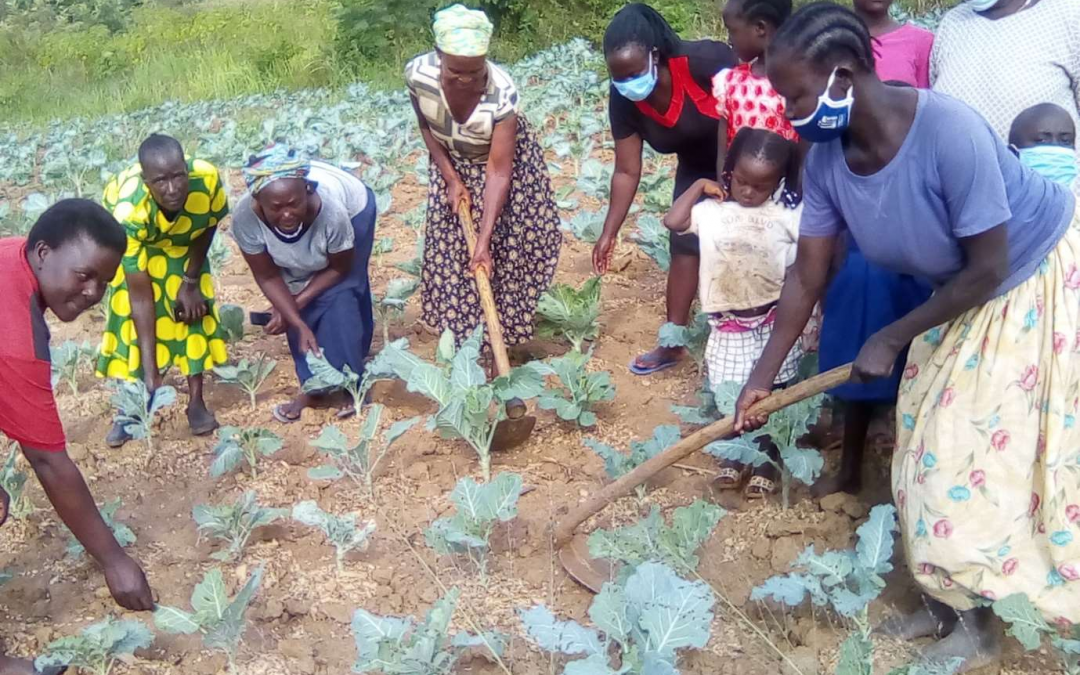 Many rotarians have contributed to the tradition of humanitarian service for the benefit of both local and overseas communities – a tradition eloquently summarised by Rotary’s former 6 Areas of Focus. There has been, perhaps, less of a tradition of ‘Support for the Environment’, which is a new Area of Focus. If there are any Rotary clubs wishing to continue that great tradition of humanitarian projects but with a core environmental component they need look no further than a project concerned with African child nutrition. Unless this issue is treated with urgency, humanity is simply storing up more unsolvable problems for the future.

What can rotarians do about this burgeoning problem? Here is a single example of a club project which at least begins to address this issue.
CONTEXT
Before going into details of the Sherwood Sunrisers Rotary Club project, a little self-education may be worthwhile, especially as this is a problem largely unreported in the GB and I media. The ‘UNICEF Nutrition Strategy 2020-2030’, Chapter 1 provides some hard information about the state of the world’s children. The following are a selection of quotes from Chapter 1- all illustrating that there are millions of young children whose lives are being blighted now:

It seems then that within the African context where there is a general custom of mothers breastfeeding their infants, the most effective point of intervention and support from Rotary could be promotion of a far more varied diet when the  infant is 6 or more months old. In practice that means more Rotary projects which are related to agricultural and particularly horticultural development. This is where Sherwood Sunrisers ‘kitchen garden’ project becomes relevant.
KITCHEN GARDENS
Sherwood Sunrisers Rotary Club has been sponsoring the work of the African development charity Sustainable Global Gardens [SGG] for several years. Much of that sponsorship has been related to agroforestry planting, which is part of the ongoing Tropical Tree-Planting & Conservation project mentioned elsewhere. There are several Rotary clubs supporting that project, but Sherwood Sunrisers have focussed on providing agroforestry trees for several women’s ‘self-help’ groups whose founding purpose was to provide homes and care for large numbers of orphans & vulnerable children [OVCs].
Covid related lockdowns and travel restrictions in 2020-21 have meant that the usual monitoring field visit has not taken place since November 2019, but current records suggest that at least 3,000 trees have been planted with Sherwood Sunrisers sponsorship. There have been 3 important precursors to Sunrisers kitchen gardens project. One is that SGG has been implementing a feeding programme in partnership with 9 women’s groups to provide a supplementary
weekly meal for approximately 450 OVCs living in Busia County, West Kenya. This programme has been operational for more than a decade. At the start of this feeding project about 40-45% of the OVCs suffered from the problems mentioned by UNICEF in the previous paragraph. In subsequent years SGGhas observed an improvement in the general well-being of the OVCs but with persistent concerns about the dietary needs of these children. This cohort of 450 children has provided the core beneficiaries for kitchen garden scheme.
A second precursor of importance was a previous SGG project to establish a ‘demonstration plot’ within the region where the children live. This plot was started in 2014 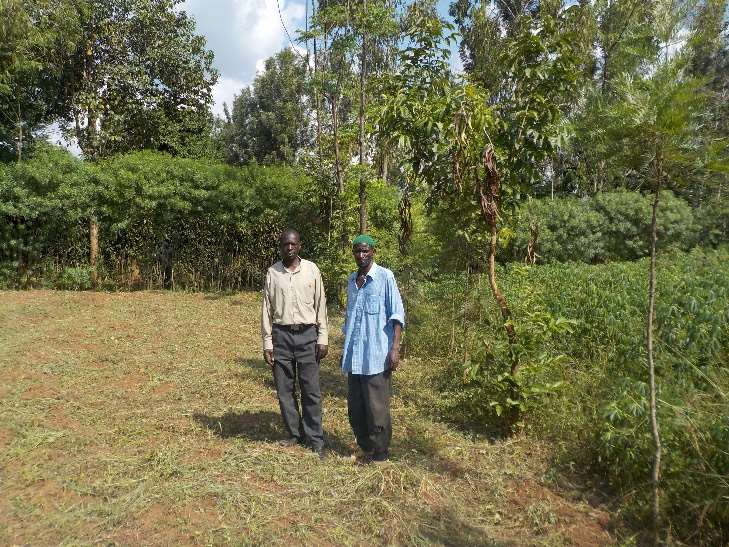 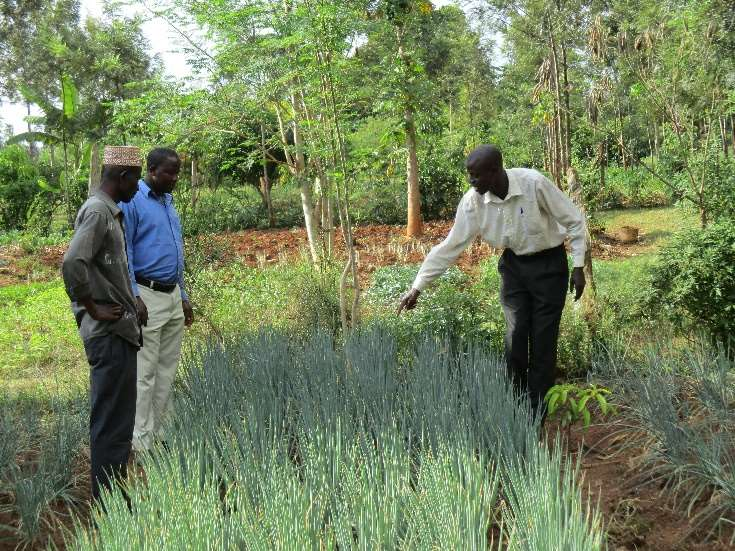 The demonstration plot was started on land with infertile soil and a crop of cassava. The cassava will provide bulk food but it is of low nutrient value. It will fill the stomach but not feed the body well. Thus, the land was cleared [see above left] and it was agreed to plant only fruit and vegetables, rather than the traditional maincrops of maize and cassava. These new crops were to be used primarily to provide nutritious food to approximately 150 children from 3 neighbouring OVC groups. Over the next 5 years the cultivation methods used on the plot were transformed, with permaculture & agroforestry principles being adopted. Five years later, the plot had an orchard with more than 20 fruits [bananas, pawpaw, mango & citrus], a pattern of double-dug raised beds growing a variety of vegetables [sukumawiki, cowpeas, black nightshade, spider plant, amaranth etc] as well as several Moringa oleifera trees [see above right].
Furthermore, the area of land dedicated to this intensive, horticultural production has been expanded and similar plots have started to be developed elsewhere.

The problem with this development was that, although 3 of the OVC groups benefitted by having a source of fresh green vegetables, the 6 other groups were too distant to gain such a benefit. After providing a model for community fruit and vegetable production, SGG considered how best to spread these new horticultural practices to the other groups where there are approximately 300 other nutritionally deprived children. This is where Sherwood Sunrisers kitchen garden project started to take form.
We want to acknowledge here a third source of ideas & information, which has come from Food Plant Solutions RAG, and we suggest that any club wishing to work on improving child nutrition should look at www.foodplantsolutions.org and the resources available there. This kitchen garden project for OVCs and the households where they live began with a scheme to encourage farmers with OVCs to plant trees and start developing their farms as agroforestry units. The intention here was to improve the on farm environmental conditions with trees being used to resist soil erosion, provide shade and protection from dessicating wind so that new, more vulnerable crops can be later introduced. The other intention was to discretely encourage the growing of fruit trees, atype of land use which was previously very limited. The records collected in Kenya in 2020, but not yet confirmed by SGG, suggest that 5,594 seedlings were planted by the first 3 OVC groups to receive grants. SGG which undertakes the necessary monitoring field visits on behalf of Sunrisers has some reservations about how many will survive the subsequent seasonal droughts but the anticipation is that more than 3,000 will.grow into mature trees. What was most pleasing about the tree reports from these groups is that they showed that whereas the great majority of planting was multipurpose species such as Grevillea robusta, some 715 fruits had been planted by 77 participating farmers in a locality largely devoid of fruits previously. After this initial agroforestry stage investment was channelled into promotion of kitchen gardens. Currently there are 9 groups being sponsored to develop a community ‘kitchen garden’ where it is anticipated that most vegetables grown will be consumed by group members and their households. In June 2021 a progress report for the same 3 OVC groups was received. These groups mentioned the problem of lack of rain during the March-May rainy season, but had manged to produce worthwhile vegetable harvest. There is a lot more that needs to be done in order to ensure satisfactory standards of child nutrition in the future, but at least a start has been made in the locations around Busia. 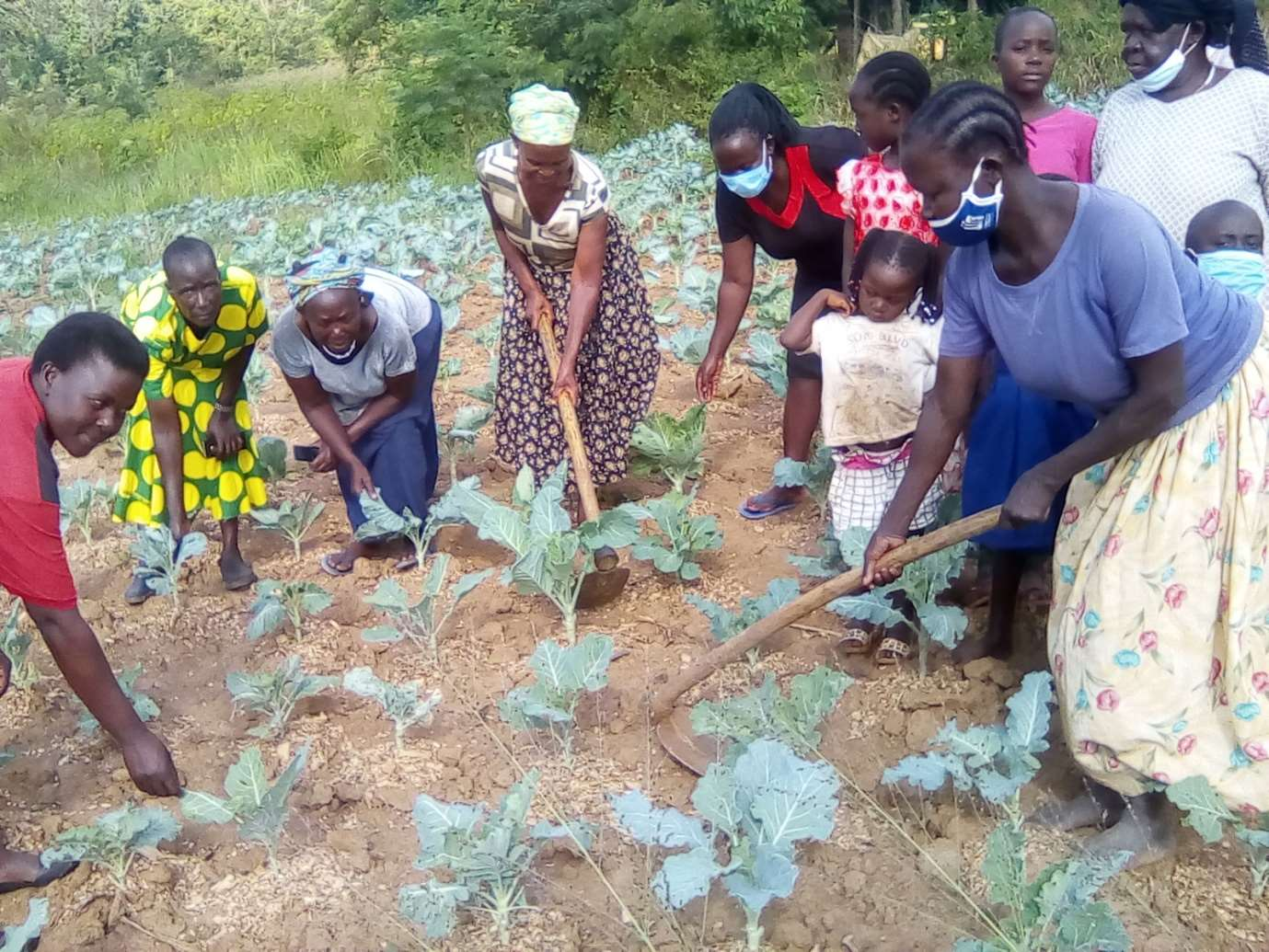 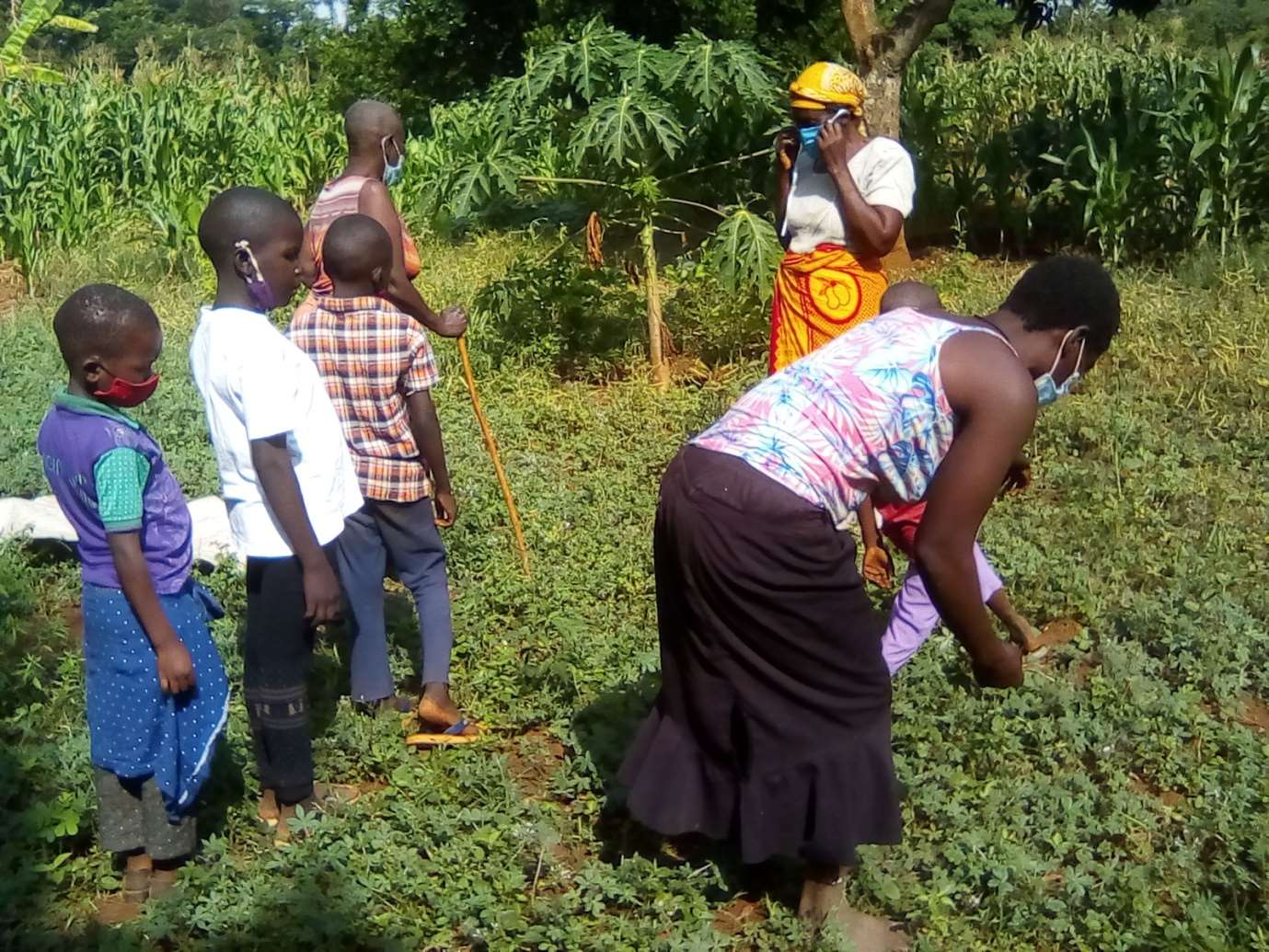 Here [see above left] women members of Mukwano are tending their communal garden where there is a crop of sukumawiki. This is probably the most popular green vegetable found in Busia – now grown in small plots like this not just for home consumption but also for commercial sales. The other photo [see above right] shows members from Upendo women’s group harvesting ‘spider plant’. This is a traditional indigenous vegetable, which is increasingly being grown. Indigenous vegetables, [e.g. amaranth, black nightshade] have the advantage of being well suited to the local weather & soil conditions. Furthermore, they grow much more quickly and require far less water than maize, which is the dominant crop in West Kenya. This is a case of small-scale farmers adjusting to ‘climate smart’ farming in preparation for damaging climate change. It is particularly pleasing to see both pawpaw and bananas visible in the background. The message of more fruit and vegetables for better nutrition is beginning to reach these farmers.